These cards are usually very artistic with pictures and symbols including the symbology of Astrology and Numerology. No one is sure of their true origin but Tarot Cards have been claimed to have originated in China, India, and Egypt. Tarot Cards in their present form first appeared in Italy and France in the late 14th century.

Psychic Readings
There are many different tarot spreads used by people for readings. Everyone has their own intuitive interpretation of each spread, many psychics claim the images move for them or talk to them. Tarot cards are used in many modern day psychic readings not for "fortune telling" but as a tool for intuitive insight.

Tarot Meanings:
Tarot cards have also been used by many including gypsies over the years in the art of fortune telling.
The standard modern decks of Tarot consist of 78 cards divided into two groups. Each card has a meaning or interpretation.

Minor Arcana:
The 56 cards in the Minor Arcana represent the more every day to day events and situations and are divided into 4 suits of 14 cards.

The suits, which are comparable to a deck of modern playing cards are as follows: 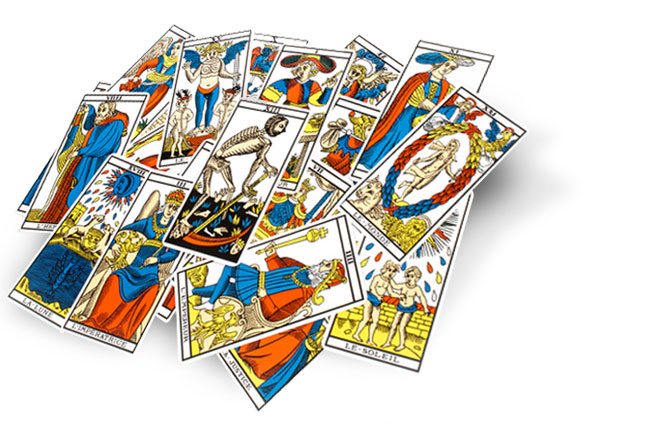 Cups (hearts) - Element: Water
Represents your emotions and what they are creating.

Each suit of the Minor Arcana has ten cards numbered 1 to 10 and four court cards ( King, Queen, Knight, And Page).